Behold the Power of Oops Marketing

Mistakes happen. They occur in every function of a business… even Marketing (gasp!).

The best way to deal with any mishaps is to nip them in the butt and be prepared with a plan for when they happen. With more moving parts within marketing than ever, it’s reasonable to believe that room for error is at an all-time high. Some marketers hit crisis mode when the inevitable happens, while others have prepped themselves with smart protocol to deal with it.

A while back, an unknown (but believed to be quite large) population of recipients had an email from photo printing and hosting service Shutterfly land in their inbox, congratulating them on their newborns. The personalized one-to-one email marketing approach utilizing big data to connect with customers in an informed and intimate way is one that’s been recently ubiquitous as companies get smarter about using their data. However, in Shutterfly’s case, this particular campaign backfired.

According to the influx of people revealing so on Twitter, vast amounts of the congratulatory new-baby emails were received by those who have not had a recent child and those who not expecting one any time soon. Shutterfly has yet to follow up on the blooper. A fine example of how targeted, personalized email marketing could hit a glitch and miss the intended target, and they are not alone!

In modern email marketing, with massive data many moving parts, many of which lean on automated technology to drive efforts, the risk of mistakes are arguably higher than ever. Even a slight hiccup in a robust automation-driven marketing framework could cause a widespread, embarrassing customer-facing malfunction. In Shutterfly’s case, although they have failed to comment on the blunder, it was likely a case of incorrectly mapping an automation workflow to its appropriate list; either mapping to an incorrect segment or to a broad parent database instead of a sub-level query.

As the marketing platform of smart companies are becoming more robust, they are beginning to understand the probability of such errors within a complex network of voluminous customer data and algorithmic functions, and are even strategically planning for such probable occurrences.

Marketers often times find themselves playing the part of proverbial alchemist. That is, taking something with seemingly little opportunity and turning it to gold, or at least an unimagined positive outcome. Marketers see opportunity in many places that others wouldn’t. Often, a small and overlooked piece of content could spawn a series of valuable information in the form of a full multifaceted, revenue-bearing campaign. Sometimes, the value that marketing opportunists see is even in the snags.

There may not by reasonable ways of preventing all business blunders, but at least some teams are preparing for them. Twitter is known for keeping a repository of “oops” marketing emails for use in the cases of inadvertent glitches. A recent email the Twitter ad team sent as a follow up to a miss-mapped segment follows a great formula for good recovery strategy.

Twitter points out it’s mistake instead of silently hoping that nobody noticed. Of course they noticed. Twitter owns the problem in the distinct, concise first sentence of their email: “Oops!” The team goes on to explain the context of the issue to eliminate the confusion and then apologizes. Their explanation even allows them to describe their new offering as the negative-to-positive spinning begins: “The email is part of a new educational resource we are testing to support advertisers during their first few weeks of advertising”.

They go on to put the spin in full turn with the closer, offering the opportunity to continue to be on the unintended distribution list: “However, if you found this morning’s email helpful and want to continue to receive information about how to advertise on Twitter, click on the button below to let us know.” Then the call-to-action in the form of a visible orange button.

DJ Waldow, Digital Marketing Evangelist at Marketo,blogged about the practice of crafting a perfect “oopsie email” forMarketo Blog. His example pointed out a quickly-executed recovery by retail supplierPet Supplies Plus that followed a Black Friday sale offer that was inadvertently sent after Black Friday already took place. The recovery email, that likely lived in the marketing team’s email content arsenal as a proactive “just in case” solution, was nicely done. Because it was prepared, it was sent immediately.  It also owned the mistake, explained, apologized for the incidence and even used it to their advantage.

First off, any email content that includes a ham-handed dog using a computer is sure to ignite some attention and likability. Include a speech bubble and you’ve got a home run. The store made a point to then use the “sorry” to thank their customers for their loyalty. Then, their approach was picked up by some great marketing blogs awarding them some pleasant publicity as a result of their error. 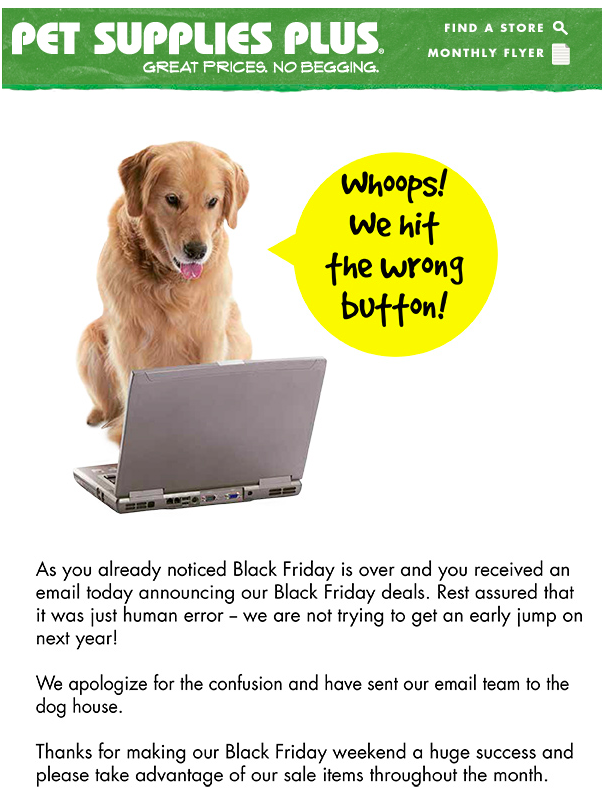 Even mistakes that are out of the hands of the marketer could be spun into an actionable, opportunistic approach. Earlier this week, online source for antiwar news and opinion AntiWar.com with self-described devotion to “non-interventionism” was unexpectedly compromised by foreign hackers.  AntiWar.com Director of Operations Angela Keaton, jumped on the issue by immediately issuing an email communication to site subscribers about the breach, and warning of certain pages potentially acting funky.

The next day, the below follow up note succeeded the original update. The second drip not only kept readers informed of the situation, but motivated their will for the cause. Keaton described the attack, their bout with the FBI and other obstacles that challenge their path. Here, the email marketing recovery formula was infused with an inspiration-inducing tone which reinforces the basis of readers’ following the site in the first place; “Every time the War Party tries to silence us, we come back stronger.” The note goes on to remind readers that their support is the key that allows them to overcome such burdens. Then, a subtle CTA to donate.

Mistakes happen in all functions. In the ones that are customer-facing, it’s important to be prepared and turn a negative into a positive with creativity and smart strategy. Don’t fret the mistakes, they happen. And when they do, don’t just say you’re sorry, make something of it!

Reposted with permission from vincetech blog.

Fascinating Facts About PPC You Need To Know